Over 20 Million Job Opportunities and the new era to a Sustainable Arab Fashion Industry. 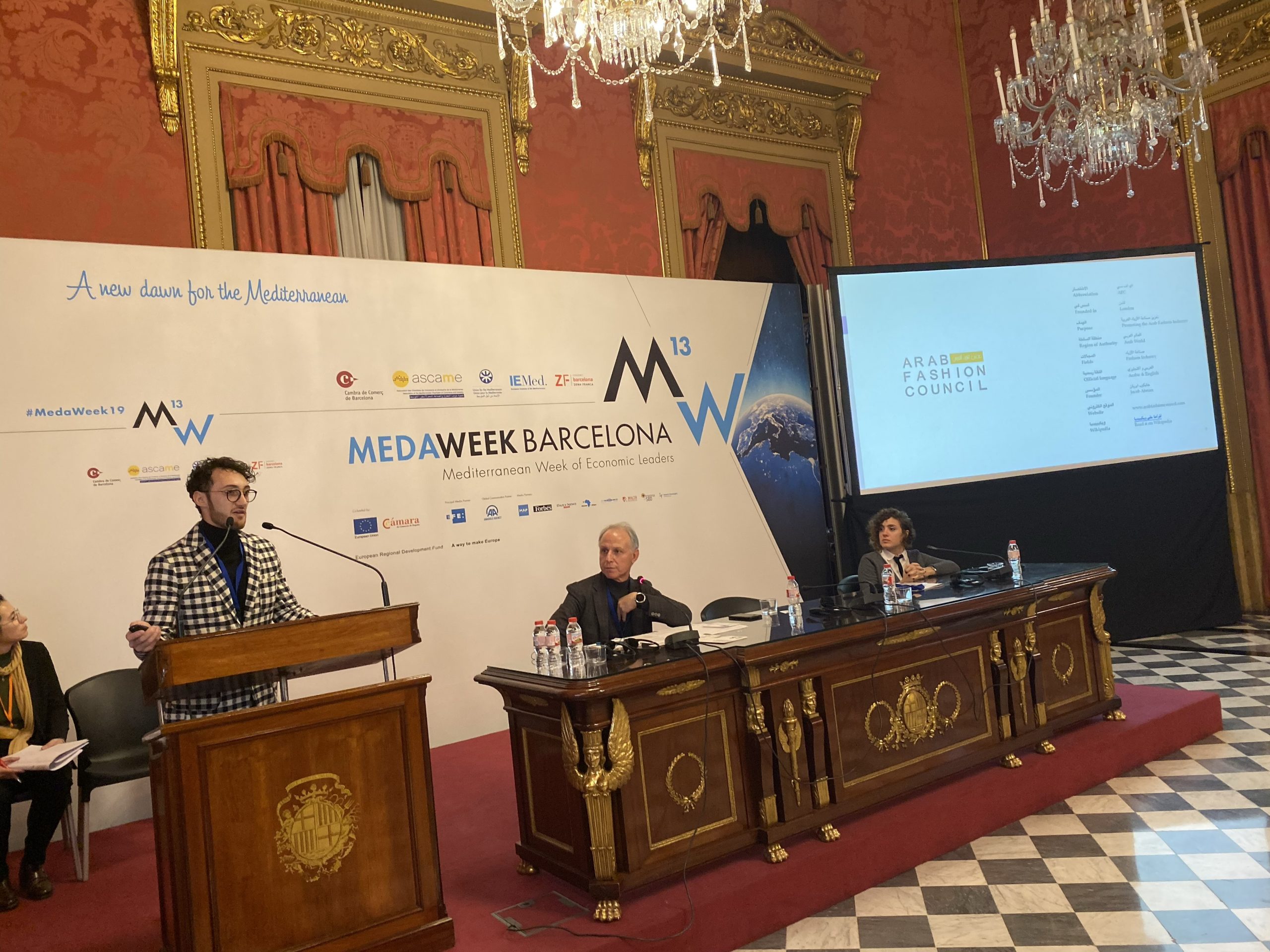 Dubai, November 28, 2019: Over 45 countries participated at the MedaWeek in Barcelona (The Mediterranean Week of Economic Leaders) from the 20th to 22nd of November 2019, the event hosted numerous key thematic and sectorial fora which has welcomed over 20,000 attendees from all over the world. These included entrepreneurs and representatives of the private sector, business support organisations such as chambers of commerce and promotion agencies and political authorities. The MedaWeek Barcelona saw the participation from over 45 countries across the globe and the Arab Fashion Council explained the role of the Arab Fashion System in the creative Economy, creating over 20 Million job opportunities and driving a sustainable economical-industrial era.

The 13th edition of the MedaWeek Barcelona, brought many trending topics on the table and served as the flagship Mediterranean entrepreneurial-economic platform for the entire world. This year’s edition covered three main objectives as a central axis:

MedaWeek Barcelona 2019 started with the Forum on Business Development in Africa, which advance the trilateral Europe-Africa-Asia Cooperation Agenda for the coming years in a context of political transition, listing the latest regional transformations, the key involvement of regional economic actors and the new horizons for the African business world.

The Forums of this edition focused in particular on the harmful impact of plastics in the Mediterranean region and especially in the Mediterranean sea, the urgent need to achieve a circular economic system in order to develop sustainable practices in the major Mediterranean cities and in the textile industry, as well as the support of renewable energies. Ethical business practices and gender equality have also taken a central place in MedaWeek Barcelona to ensure the transition of the Mediterranean area to a leadership role at the head of 3 continents.

Jacob Abrian, Founder and Chief Executive of the Arab Fashion Council drew attention to the importance of the Arab Fashion Council’s mission in establishing a creative economy in the region with its  influence that spread across the south Mediterranean countries including the North African Arab countries such as Egypt, Libya, Tunisia, Algeria and Morocco and the Levantine coast that include Lebanon, Syria, Palestine and Jordan.

While the vision of the Arab Fashion Council remains simply to establish a creative economy in the Arab region, its mission is to create an Arab Fashion System that efficiently caters the entire fashion supply chain.

The Arab Fashion System categorises the Arab World in 3 main clusters set as:

After identifying the outlook of the supply chain in the Arab region, the Strategic Development Goals of the Arab Fashion Council relies on modernising the existing manufacturing facilities and to enable through investment new facilities to operate in the region which opens new horizons to a sustainable creative economy that would have the capacity to employee over 20 million people in the long run. This doesn’t only benefit the Arab countries but also the European fashion industry enabling more sustainable and better logistics due to the proximity in geographical terms.

Jacob Abrian argued the importance of the Arab Fashion Council’s mission to indirectly tackle the European migrant crisis which mainly takes the route from the North African Arab countries to Europe. “After more than a century we still talk about the Titanic where over 1,500 people died in the maritime disaster; however, we are forgetting how many Titanics are still occurring on frequent basis in the calm water of the Mediterranean where the overall estimates are that over 22,000 migrants died between 2000 and 2014 according to the International Organization for Migration (IOM).” It is rather more important to think strategically how do we limit this crisis by providing opportunities for these migrants at their countries”.

When it comes to sustainability in fashion which is becoming the new luxury trend, Jacob Abrian, warned the industry leaders and authorities from the uprise in abusing the trend which he defined as “Green Laundering” Accordingly, the Arab Fashion Council presented the road map on how the Arab Fashion System will be at the front line of implementing and ensuring a sustainable approach in line with the United Nations Sustainable Development Goals and the authorities in setting up a dedicated commission to monitor the standards of the Arab Fashion System by employing cutting-edge technology techniques including an efficient and transparent tracking system where the Arab region will not be a fertile land to the Green Laundering.