SAUDI ARABIA TO HOST ITS FIRST EVER ARAB FASHION WEEK 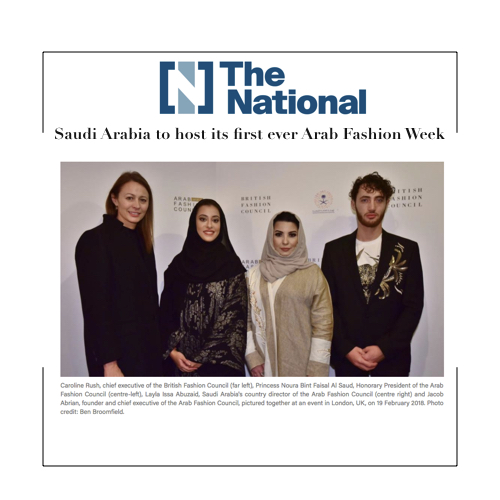 Top global designers, models and industry trendsetters will sashay into Riyadh next month

The eyes of the fashion world will be on Saudi Arabia next month as the kingdom hosts its first ever Arab Fashion Week.

Top global designers, models and industry trendsetters will sashay into Riyadh on March 26 to 31 for a week of haute couture organised by the Arab Fashion Council, the organisation’s honorary president announced in the UK capital on Monday.

Princess Noura bint Faisal Al Saud revealed the news at a London Fashion Week event celebrating the Arab Fashion Council’s new strategic partnership with the British Fashion Council – something she said: “reflects the global interest in our vision to transform the fashion retail industry in Saudi Arabia into a global and regional market”.

The princess added that the global support shown for the inaugural Arab Fashion Week in Riyadh shows that Saudi Arabia is seen increasingly not just as an economic force, but as a “cultural and creative hub”.

“This is only the first big step,” she said. “Our doors will be open to welcome everyone, the whole world, to be part of this change, and I am looking forward to receiving everyone in Riyadh to witness together the kingdom’s ambitious Vision 2030.”

The Arab Fashion Council was established in 2014 and represents 22 countries across the region. It already hosts a prestigious annual fashion week in Dubai and recently set up a new office in Riyadh.

Layla Issa Abuzaid, the organisation’s Saudi Arabia country director, said the partnership with the British Fashion Council was designed to support young talent as well as to attract international brands who want to tap into the Arab market.

She added: “By launching the first Arab Fashion Week in Riyadh, we are aiming at more than creating a world-class fashion event.

“We believe that in promoting the fashion sector, we will also promote other sectors such as tourism, hospitality, travel and trade.”

Ms Abuzaid also paid tribute to the ambition of Saudi Crown Prince Mohammed bin Salman’s Vision 2030, which aims to diversify the kingdom’s economy and create new opportunities for its young population. “Our real wealth lies in the ambition of the people and the potential of our younger generation,” she said. “They are our nation’s pride.”

The Arab Fashion Council’s founder and chief executive, Jacob Abrian, said Riyadh’s new partnership with the British Fashion Council would take Arab couture “into different levels”. He added that he hoped it would encourage London-based designers to come and explore the huge potential in the Arab world of fashion.

His aspirations were echoed by Caroline Rush, chief executive of the British Fashion Council, who said she was excited by the prospect of opening up the Arab region to international businesses.

“We hope to use the incredible knowledge that the Arab Fashion Council has of the region to make sure that we’re able to open it to our incredible British businesses,” she said.